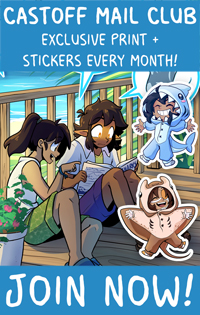 For the entire month of April I'll be hosting a ton of different events to help support the comic, and give back to all my readers! The full list of all the details is on the 5th Anniversary page, but here's a basic rundown:

★ All new patrons this month (at the Mage tier or higher) get a free Shame Cube sticker!

★ I'm hosting a fanart contest, with a grand prize of an in-comic cameo appearance (for you or an original character of your choice)!

★ All Castoff merch on my store is 20% off for the whole month!

★ I'll be releasing new content on Patreon all month, including a Q&A video and a special patron-only illustration (just like last year!) (Also, I need questions for the Q&A video! Leave some in the comments if you want to ask anything about the characters, world, or the process of comic-making! The video will go up for patrons first but will be released to the public later on.)

Again, full details for all of this is on the 5th anniversary page for your perusal! I'm EXTREMELY excited about this event, and I'm gonna do my best to make it the best it can possibly be! Here's to 5 years!!

(Also, a small note here at the end to say we're going back to bi-weekly updates! I got my buffer back in shape so we're all good~ Thanks for your patience!)