Hey everybody! Happy Spookymonth! I finished this year's Halloween illustration/wallpaper~ The theme this year is "tiny wizards doing potentially dangerous things". It's up on Patreon now, so patrons, go get it! 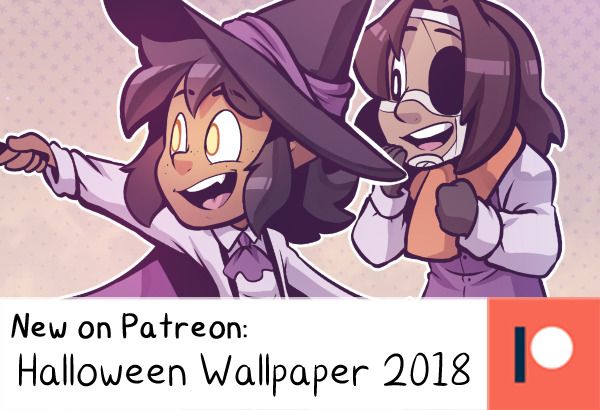 It's the final shoutout (do do do dooo) for this year's new Spiderforest comics! Go check 'em out if you haven't already!

Fighting Dreamers: Whenever something dreams, a universe is created. Thousands are spawned a day. But when these universes are under threat by monsters that aim to destroy them, warriors are needed to protect these universes. And that’s where the Dreamers come in,the dream avatars of sleeping heroes that are capable of jumping into these universes to save the day! Oh yeah and the sleeping heroes happen to be house cats.

Goddess of Paradise: An ancient goddess wakes from a long slumber only to find her divine authority mysteriously taken from her. In order to restore her former glory, she’ll need to journey across the remains of her territory, reunite with close relationships, and face the problems she left with them long ago.

The Last Traveler: Keira is lost in an alternate world where portal travelers are outlawed and met with an untimely end. Finding a way home becomes increasingly complicated as she hides among nobility where she becomes the catalyst to uncovering long kept secrets of a royal family.

Corner the Maze: Follow the adventures of Chimalli Ramírez, a racing driver who has found himself stranded in another dimension after veering off track during a sudden rain storm. He’s still not sure whether he hit the wall or actually went through the strange glowing green portal, but either way, he’s determined to fight his way back home and finish the race.